Its Been a Long, Dry Year but a Fruitful August and September

Getting back into the swing of things after a long year with some real highlights and some dry spells...

Our great group of Junior Riders competed at the Northern California CDS Junior Championships in August and had great success (all for their first championship show!) 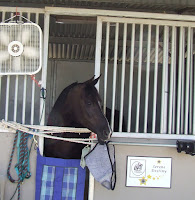 Our Quadrille team wowed everyone with three great demo-performances at Intro, Training and First Level. Scoring 71, 69 and 68 (and some change) respectively. I hope to publish a video of the performances on this blog. The members of the Quadrille Teams included Madison LeFlamme, Emily Eckart and Emma Brown from Team YogaRider as well as girls from BEAR Equestrian and Laurie Moore Dressage to make up the La Jolla Quadrille Team. 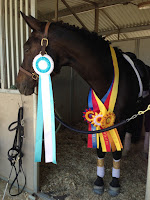 The individual and team riders did very well also. Emily Eckart placed third at training level championship classes and Training Level Team Competitions on Savannah Blue and Madison LeFlamme placed fourth on Sahara with the rest of the First Level team in Championship Team Competitions. It was a fun learning experience and a great four days!
Posted by Yoga Rider Dressage Christine Rossi at 9:12 AM No comments: